Kotlin , Java ,C, C++, Python, Swift ,React ,Angular and Objective C are most popular app development languages that ranked among the India top 9 most successful and useful languages in 2023.

As A developer you must have knowledge and Idea about the trending android app development languages which is useful for you as well as for your business .
Today, most of the businesses are turning to mobile applications to expand their infrastructure and serve a larger client base. With a market share of more than 86% in application development, Android OS dominates the mobile application market.

In the last couple of years, business enterprises have come to the conclusion that mobile apps are highly significant for brand expansion & customer engagement. Apps have become a popular platform to build strong connections with customers. Currently, most companies whether big or small invest in Android app development company for user engagement.

Still, selecting the right app development language is not simple due to the availability of multiple options. To guide you with a helping hand, we have mentioned a complete list of trending programming languages that can make Android app development fast and secure. These languages reduce the effort that developers put in by improving productivity to handle challenging tasks.

While Kotlin is the official language for Android app development, there are several other languages that can be used. Details about them are mentioned below to help you make a better and smart decision.

Having concise code syntax makes it the perfect choice for Android app developers. It can be easily compiled into JavaScript or native code and operates on the Java Virtual Machine (JVM).

Java is a general-purpose language designed to have limited dependencies as possible. This makes it usable across different mobile app development platforms.

Java is one of the most popular Android app development languages because of its simplicity and availability of Javascript. Java is easily compatible with several different platforms which means you can use whichever operating system you like as per your comfort. 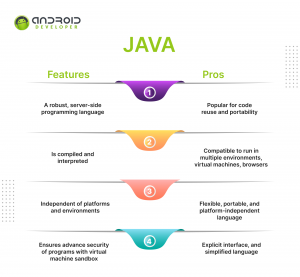 This programming language is highly popular among developers because it offers an easy-to-use syntax and is super fast. C++ is also popular in other industries including game development, machine learning, and desktop applications.

Moreover, Swift is a renowned successor to Objective-C, which is heavily influenced by C++. This language is not limited to Android apps and has many features that make it perfect for iOS development.

Launched by Microsoft as a major transformation of the C and C++ languages. It was designed to be the best language to develop android app having powerful, modern setup. These days, C# is the most popular choice thanks to its simplicity and power.

C# was developed to support developers to write their programs in a simple and precise way that can be easily read and understood. With this syntax, it’s easy to start writing code without having deep expertise in different codes.

Another key reason behind C# success is that Microsoft has tools for all stages of development work. This comprises IDEs including Visual Studio Community Edition which provides all the features required to develop your app from start to finish without additional purchases.

Python is a widely popular Android app development language used for building web applications, desktop apps, media tools, machine learning, and network server. The most popular Python applications are YouTube, Instagram, and Pinterest. The language has excellent library support, robust integration, and improved control capabilities. If you are looking to build your Android app – Python is the best choice.

Python language can be used for Android development through the use of third-party tools that convert apps into Android Packages. Python apps are known for higher memory consumption.

After checking all of the best options that an organization looks for in app development, there is nothing left but analyzing how these programming languages compete with each other to offer the best features. You can Hire Android App Developer as per your business requirement and check how well they can integrate these languages for app development.

1. What Is Android OS Used For?

Android is an operating system developed for mobile platforms. It is mostly used for smart phones, majorly for Google’s own Google Pixel, as well as by other phone manufacturers. It has also been used for tablets including Motorola and Amazon Kindle. A modified Linux kernel is used as Android’s kernel.

2. What is mean by Android app?

3. What language is used for Android app development?

The official language for Android app development is Kotlin. Most of the Android parts are written in either Java or Kotlin and its APIs are designed primarily from Java. It is easy to develop using C# and C++ programming language as well.

4. Do you assure about security & confidentiality of the app idea?

Yes, we sign a strict NDA to protect your app idea & data. Hence, we ensure complete security and privacy of your android app development project.

5.How much time is needed for

The time to build a mobile app is based on multiple factors ranging from features, scalability, hosting server and functionality.

6. Do you offer after app deployment maintenance?

We provide our clients with extended maintenance plans. We also fully support any app we design and develop if you encounter any problems or require any enhancements.

Learn Our Top Android App Development Languages For Your Business